The Grand Opening of the Grill & Chill

Our goal was to give the best customer service. Regular meetings and trainings with employees were in the plans and making sure the customer always has the best dining experience. Employees now follow a strict “code of ethics” and have regular cleaning duties to keep the place clean and always presentable.

December 2012: After the 2 original basement coolers that kept our kegs and beer cold broke down, it was time for some quick business decisions. It was decided within hours to build a 13’x15’walk-in cooler in the basement to store our bottled beers and our kegs. This would prove to be a longer than expected and very costly 8 month project, but an investment that was needed and appreciated.

We started by digging out the DIRT cellar about 2’ deeper than it was and laying down insulation where the cooler would be. Concrete floor and footings were poured. A new shelf storage system was built. The existing supporting posts were updated. Employees could now walk without hitting our heads on pipes and could practically eat off the floor compared to what it was! The cooler was built and spray foam insulation was put in the walls with a refrigeration system to keep the beer at just the right temperature during storage.

Decmber 7, 2013: By popular request, the Paciorek’s decided it was time to start serving breakfast on Saturday and Sunday mornings. This was in their original business plan to start about 1yr after the grand opening. After lots of interest, it was time. This proved to be a good move and was growing every weekend as the word was spread.

March 1, 2014: The idea came to have a “Paddock Reunion”. There are so many memories from the “good ole days” in the 80’s and 90’s and the feel back then was like the TV series “Cheers”. Everyone knew everyone’s name and the same crowd were expected every night. The bartender eveyone remembers, Kerry, Tim, and Tony organized it and it was great! It was a day of getting many of the “old crowd” together at the same time and reminisce and laugh about the past. Some have passed on and are missed, but the countless stories and laughter will live forever, many shared that day!

The Grill ‘N Chill will continue to make history and making this address the place to be! We thank you for your continued patronage as we could not do it without you!

July 2014: After a 7 month run with breakfast, it was decided that we would discontinue weekend breakfast. Basically, the cooks and waitstaff needed a break from the early hours and summer breakfast slowing down, it was a business decision to put all focus back to lunch and dinner only for the time being.

August 2014: Renovations on the exterior of the building begin! After a car hit the front of the building and some repairs needed to be done anyway, we decided to go “all out” and give the whole exterior a much needed facelift, something that hadn’t been done for well over 40 years. New windows were installed, new siding, a new “inviting” front entrance and front door area, etc. Check out the before and after pictures! 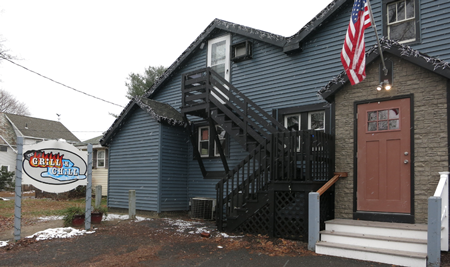 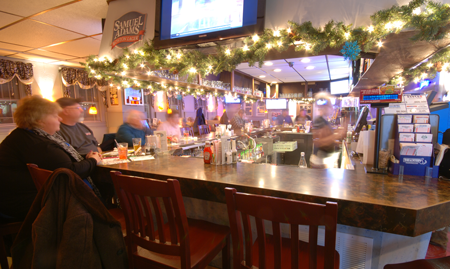